Whether you are interested in finding out more about your own heritage, or are curious about the rich history of South Africa, the frontier town of Bathurst is a fascinating place.

The area around the Historic Pig and Whistle Inn is full of interesting things to see and do. Some of the nearby attractions include: 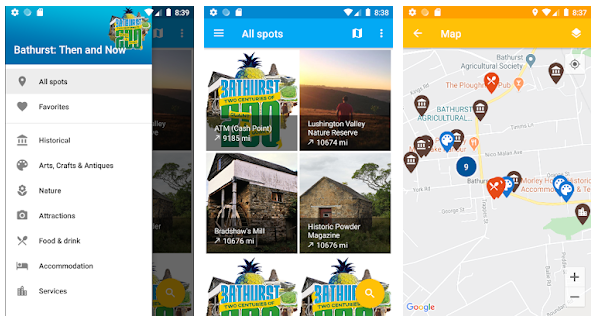 Download the Bathurst: Then and Now Android app to help you navigate your way around the numerous places of interest around the village

The Wesleyan Chapel
Built in 1832 by settler Samuel Bradshaw, The Wesleyan church is one of the many National Monuments in Bathurst. This church is an archetypical example of the type of Wesleyan churches that would have been present throughout rural areas in the early 1800s. The church houses 1820 settler Jeremiah Goldswain's Family Bible, it survived being besieged in the Frontier Wars, and services are still held in the church every Sunday.

St John's Church
The oldest unaltered Anglican Church in South Africa, St John’s Church was built in 1834 and provided sanctuary for the settlers through the Frontier Wars of 1834, 1846 and 1851. St John’s church is also a National Monument

Bleak House
Now a coffee shop, private residence and National Monument, Bleak House was originally built circa 1825 for Lt. Alexander Bisset and was restored in 1883 by Brigadier Nauhaus.

The Toposcope
Built in 1859 with stones from original settler dwellings, the Toposcope marks the place from where the 1820 would survey the surrounding settlements. Details about the various settlements are recorded on bronze plaques around the monument. The view from the Toposcope is spectacular, and it is possible to see for miles around, from the Great Fish River to Kwaaihoek.

Bradshaw's Mill
This building, built in 1821, was originally used by the settlers as a wool mill, so that wool from their sheep could be used to make cloth. A third storey was added to the Mill in 1835 for corn milling. Today the restored Bradshaw's Mill is home to one of the few working water wheels in southern Africa.

Morley House
Built in 1828 by Thomas Hartley, Morley House is preserved as a National Monument because of its historical value. It is one of the few 1820 settler dwellings to have survived looting during the Frontier War of 1834. It was home to settlers Jeremiah Goldswain and Henry Hartley, the notable big game hunter and founder of Hartley in Zimbabwe. As it is a private residence, Morely House is not open to the public.

Historic Powder Magazine
Believed by many to be the oldest building in Bathurst, the Old Powder Magazine was built in the 1820s by the British Military to keep ammunition and weapons safe. The Store was built atop a hill for tactical reasons, and now provides explorers with a landmark for their walks around the historic village of Bathurst that promises uninterrupted views of the countryside.

Clumber Church
The original Clumber Church was built by the Nottingham party of 1820 settlers in 1825. The church was subsequently damaged in the frontier wars, and was replaced in 1837. The church then served as a defense station for British forces in 1846. The church which now stands was opened in 1867.

Barrow Cottage
This modest settler cottage was built in 1837 for the Reverend James Barrow when he was left without accommodation after the home of the family he was staying with was struck by lightning and burnt down. The walls of the cottage are basketweave watling with a surface of lime plaster, held upright by sneezewood poles.

Possibly because it is only 40 km from the thriving university town of Grahamstown, Bathurst boasts a rich intellectual and artistic community.

The Wiles Art Gallery
Home to art from generations of the Wiles family of artists, the Wiles Gallery is not to be missed if you have an eye for fine arts. Visitors can admire or purchase pieces by Walter Wiles, Lucy Wiles, Brian Wiles and Jane Wiles.

The Bathurst Farmers’ Market
A trip with the family to the Farmers’ Market held every Sunday from 9:30 to 12:20 makes for a fun day out for the whole family, and you can purchase local arts and crafts as well as fresh produce and homemade jams, cheeses and other food products.

The Penny Whistle Antiques Shop
Once housed inside the inn, The Pig and Whistle’s own antiques shop outgrew its confines and is now the Penny Whistle Antiques Shop. A wander around the little shop will reveal collectables, silver cutlery, antique crockery, jewellery and other interesting and unique pieces sourced from around the country. You will also find beautiful hand-crafted items such as lamb's wool shawls and oil paintings by local artists, and a range of Historic Pig and Whistle Inn memorabilia.

Relix and Thingz
Relix & Thingz's aim is to create a new shopping experience, where you are encouraged to relax and enjoy your time in Bathurst. This growing community is perfect for you and your family. We have a lot to offer at our home The Village Green: Collectables, books, bric-a-brac, porcelain, unique bar decor, items for your mancave, vinyl records, glassware, kitchenalia, weather instruments and now part of the new home of The Village Bistro.

The surrounding natural landscape is almost completely untainted, and is very similar to the land in which the brave and desperate 1820 settlers would have found themselves 200 years ago. Therefore, many of the activities enjoyed by locals and visitors involve appreciation of nature.

Lushington Valley Nature Reserve
In the frequently drought-stricken Eastern Cape, the area surrounding the perennial Lushington River is a perfect habitat for game, and a picturesque place for visitors to experience nature. The reserve is home to a variety of game, and visitors can enjoy walks, self-drive safaris, picnics, trail runs, and mountain-biking routes. Reservations can be made through the Pig and Whistle.

The Big Pineapple
Rather quirkily, Bathurst is also home to the biggest model pineapple in the world. Pineapples are farmed extensively throughout the region around Bathurst, and in honour of the pineapple’s contribution to the community, The Big Pineapple was erected. Standing 16.7m high, the three-storey pineapple houses a gift shop, informative presentations about the farming of pineapples, and an observation deck that provides views of the surrounding farmlands.

Blue Flag Beaches
Bathurst is only about a 15-minute drive from the Sunshine Coast and sprawling beaches. Nearby popular beaches include Kelly Beach of Port Alfred and Kariega Beach at Kenton on Sea, both of which boast Blue Flag status. Surfing is a popular pastime among locals and there are places for visitors to try out water-sports as well.